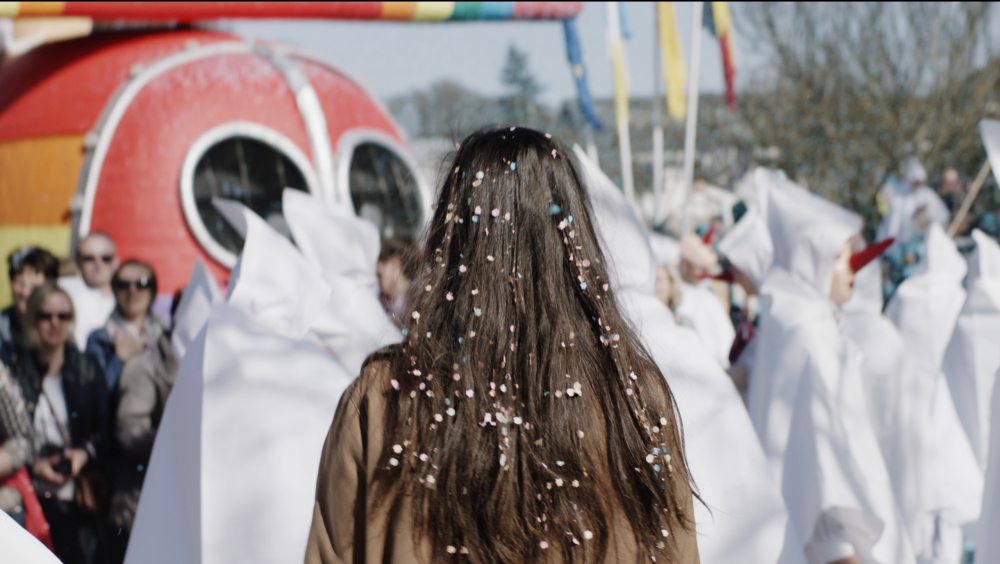 Lucile Desamory is a visual artist, filmmaker, actor, and musician and has lived and worked in Berlin since 2004. She is interested in the borders between perception, excess, the falsified and despised narratives. This interest in marginal phenomena requires a constant change in medium. She uses cinema, painting, drawing, embroidery, collage, photography, and her voice. She combines these techniques broader media such as installations, films, radio plays, and performances.

Télé Réalité had its world premiere during the 70th Berlin International Film Festival in 2020. Shot in both Kinshasa and in Belgium, the film offers a reflection on the concept of ethnographic surrealism, which it applies to the practice of “Pagan rituals” that is still widespread in Belgium. The references are the preparations for a reality TV programme about the Belgian Carnival, which is financed and directed by three Congolese producers lacking an audience and seeking a media coup by exposing the collective madness of former colonisers. Hawaly, the Burundian show runner, is tasked with organising the filming in Belgium, but her Belgian costume designer colleague appears highly preoccupied by the supernatural.

The film presents a complex landscape comprising costumes, rites, dialects, and languages, conjuring up the supernatural and the fantastic: “Is it not true that at night, the superstitious Belgian countryside, with its dark fables, becomes the brightly-lit place on the planet, a perfect landing spot for UFOs? If, we ever want to open up new perspectives in the exchanges between Africa and Europe, we will have to come up with new proposals." It is with this in mind that Lucile Desamory, Gustave Fundi and Glodie Mubikay intend to inaugurate a sort of telepathic channel between the two continents. They are creating a metaphorical tunnel, opening up new possibilities of engagement and a carnival of shared narratives.