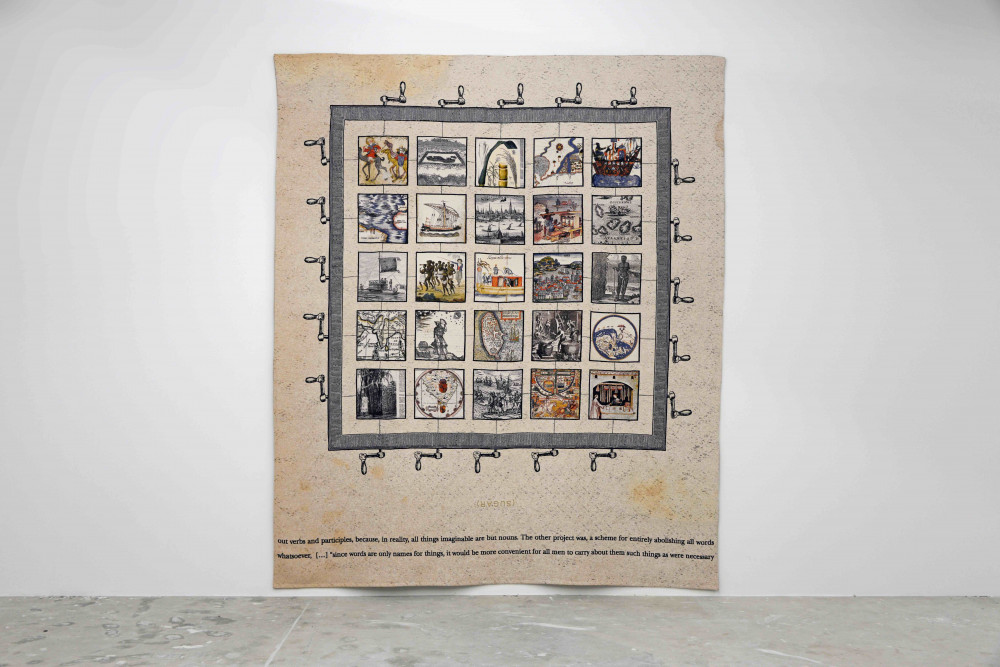 Ana Torfs has devoted herself to questioning the representation and narrative structures through strong visual works since the 90s. Slides, sounds, texts, prints, sculptures, xerography, videos, photography, textiles ... anything goes when it comes to revealing the tense relationship between text and image and the processes of visualisation, interpretation, perception, manipulation, and translation that results from it.

The title of the work, TXT (Engine of Wandering Words), refers to the etymology of the words “text”, “texture”, and “textile”, which are all rooted in the verb “texere” in Latin, meaning “to weave”, and also the notion of the “wandering word” (from the German “Wanderwort”), defining the nouns that have been absorbed into different languages, cultures, and continents, often through commercial exchange.

Ana Torfs chose these six wondering words as a starting point for the creation of her six Jacquard tapestries: ginger, saffron, sugar, coffee, tobacco, and chocolate. Each tapestry, based on one of these words, represents a machine of sorts, comprising 25 squares/images that seem to be operated by lateral levers. The images are extracts of photographs, engravings, paintings, cards, brochures, and booklets dating from various eras. A visual dictionary? A rebus? A children’s game? Characterised by associations dear to the artist, the work is also a reference to “The Engine” that appears in Gulliver’s Travels, the novel written by Jonathan Swift in 1726 and which generates permutations of word sets (the quotes that appear at the bottom of the tapestries are taken from this novel). The work is also a reference to Jean-Jacques Grandville's 1838 woodcut illustrating the book and to the Jacquard loom used by the artist, the first programmable machine that worked with punched cards.