A Blueprint for Toads and Snakes 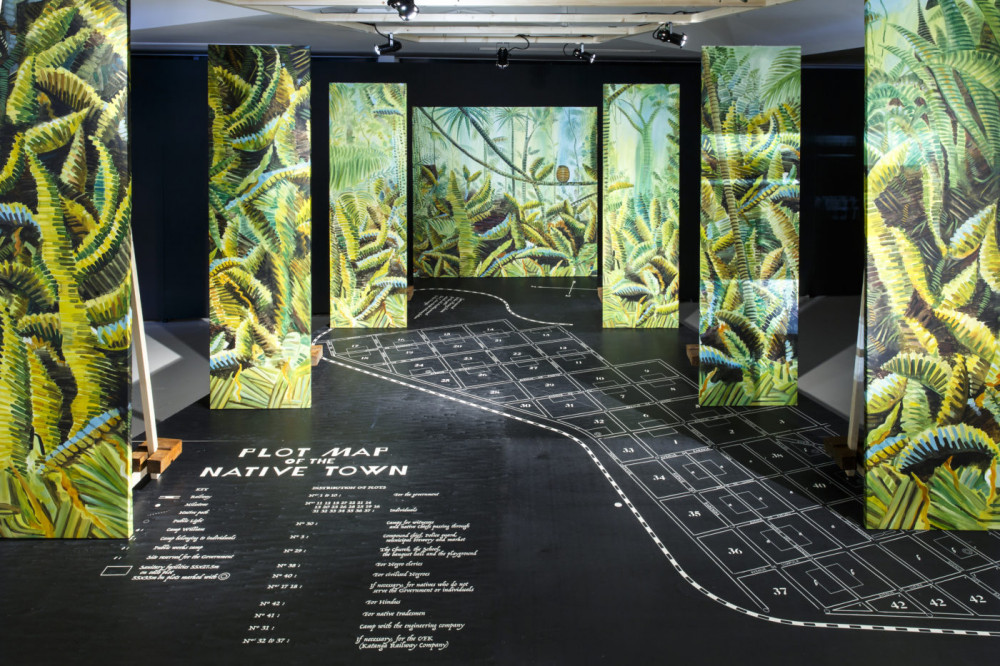 Sammy Baloji has been exploring the history and memories of Congo since 2005. His work is based on a huge piece of research, investigating the archives and the cultural, architectural, and industrial legacy of the Katanga region, as well as the effects of Belgian colonisation. The A Blueprint for Toads and Snakes installation criticizes the ongoing impact of large-scale mining on geography, infrastructures, and sociocultural structures in Congo. It consists of three parts: Chura na Nyoka, the urban plan, and Kasaian commemoration.

The play Chura na Nyoka (The Toad and the Snake) was commissioned by the Belgian colonial regime in 1957 and was written by Joseph Kiwele. It tells the story of a toad and a snake, incapable of enjoying a friendship because of their biological differences. By using elements from the set of the play, Sammy Baloji denounces the strategy of the Belgian colonial regime of maintaining its power through a policy of division.

He associates his message about racial segregation with the plans for the “indigenous city”, the mining capital Lubumbashi. Based on the original document, the plans reveal the expropriation of the residents and the aim of creating a cordon sanitaire, a buffer zone intended to separate the European and Congolese populations. The Chura na Nyoka text is well-recognized and resonates metaphorically through the streets of Lubumbashi.
The city plan is surrounded by a representation of the forest drawn in the tradition style of L’Ecole du Hangar (a workshop founded in Lubumbashi in 1946), and is a reference to the technique used by Congolese painter Pili-Pili Mulongoy

By photographing and exhibiting the 138 family portraits abandoned by the Kasaians, Sammy Baloji commemorates the forgotten history of their expulsion from Katanga during the Secession of Katanga in 1960. This seizure of independence, supported by Belgium both diplomatically and militarily, brought interethnic conflict in its wake. Sammy Baloji seeks not only to save these archival images from oblivion, but above all to give these hitherto undocumented violent expulsions, a place in history.